After living in Southern California for nearly two years we found out we would be expecting our third child.In those two years, we’d spent a lot of time visiting Disneyland and knew we HAD to incorporate it into our pregnancy announcement.

I did some searching and combining of a couple ideas before this popped into my head. We used our Annual Passes and had one of the park photographers grab some great pictures of our boys.

I did the editing on an app called Color Pop to make it black and white and make the balloons POP. (See what I did there?) then added the text from my computer!

We had so much fun with this one! We welcomed our third boy to our family in October. Can’t wait to do some sort of spin on this picture with him once he can sit up! 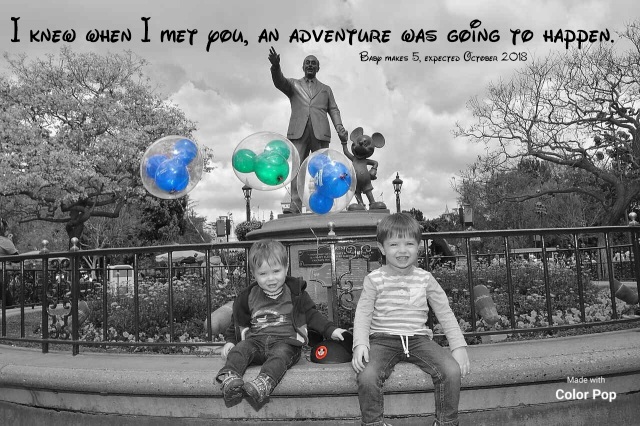 For my birthday, my husband was super awesome and planned a whole evening for me! We also got a baby sitter, which we NEVER do.

So he surprised me and took  me to Disney!

I will say, we had a shaky start at the beginning. We left our house an hour before our reservation time, only to hit insane traffic. So we called Disney Dining and explained the situation. They said the restaurant will wait 15 minutes and then it’s at the restaurant discretion if they seat us when we get there or we lose our spot.

20 minutes later we knew 15 minutes wasn’t enough so we called back in a slight panic. We asked them to tell the restaurant we were parking, so we’d be there as quickly as the shuttle and security gates allowed.

Disney Dining pulled through, contacted the restaurant and we still had our spot available.

We headed into California Adventure for a 3 course meal at Carthay Circle Restaurant. I’d never been here before. I’d seen the building but I had no idea what it was or that there was an entire restaurant, bar and lounge inside. 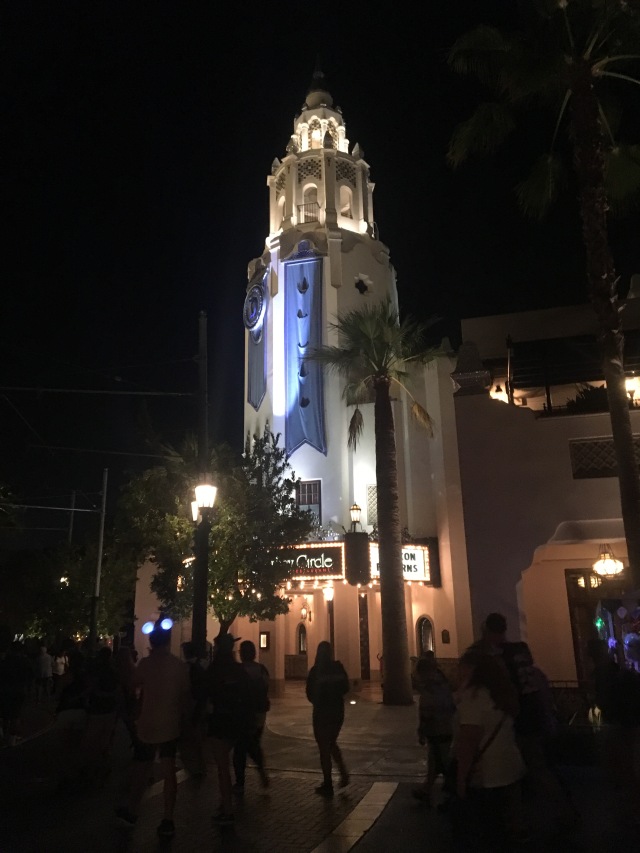 What we found was a fun atmosphere, old school movie and Hollywood themed (which makes total sense).

Particularly awesome? Besides the ambiance, food and great company was the World of Color Package that came with it! We got to pick what show we wanted to go to, 9 or 10:15 that night. After dinner they handed us a special voucher for reserved seating for the World of Color show!

Check out more info on World of Color here! The Diamond Days Celebration ends September 5th, so check it out while you can, it’s definitely worth it.

Our special seating (we were standing) was really cool! We were close enough to get sprayed by the water and feel the heat of the pyrotechnics but we didn’t get soaked. Our seats were near the Little Mermaid ride and we had a great view of all of Paradise Pier and the show. Even if you don’t do a special dining and reserved seat experience, it’s still worth going! We did hear a Cast member say the other side of the bay tended to be less crowded. 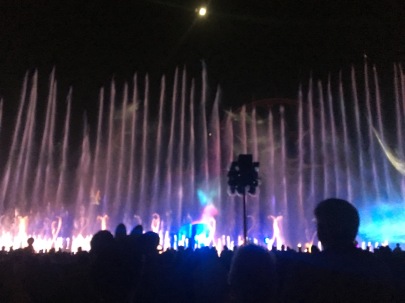 Wondering what exactly the World of Color is? It’s a special night time show done over the water at Paradise Pier. Neil Patrick Harris and Mickey Mouse are the “hosts” of the event, and it is truly charming!

It was a great birthday AND our little guy did great for the baby sitter to boot!

We live close enough to Disney land that I don’t mind doing the drive by myself with the munchkin and plus, we love Disney! It helps that the kiddo is free until 3! So in December we purchased Annual Passes to Disneyland.

As an event in February, Disney did a month long Annual Passholder Days event.

The emails we received about the event were really confusing on what was offered and what wasn’t and when and where things were happening. It was a little clearer once you arrived in the park.

We ended up going twice in that time frame.

Basically each week you got a button and a recipe card. In some of the special areas you got into there were coloring pages and special character greetings. 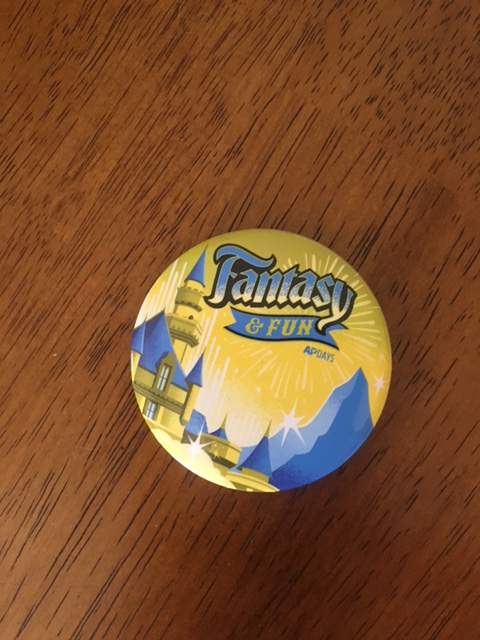 Besides the character greetings they had some cool backdrops up for pictures, Photo Pass photographers out and some special pin trading opportunities. 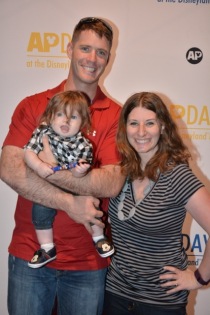 At one of locations, someone was stationed to talk about the Photo Pass capabilities (which we knew how to use and didn’t need).There was also a charging station for your phones.

A few locations had complimentary bottles of water and medium sized bags of popcorn, I think you could get these weekly also. They scanned your AP when you entered these areas, to check that you hadn’t been through already, I assume. I didn’t mind this but I felt like I had my ID scanned 3+ times each time I came into one of the AP areas and the line for scanning took longer that I imagined to be necessary.

Overall I was pretty unimpressed. I mean I enjoyed the free water and popcorn, the buttons are cool but what am I going to do with them?

I would have preferred one pin versus 4 buttons. What was nice is since we missed the first two weeks worth of buttons, they gave us those as well as the ones we were in attendance for.

Same with the recipe cards, though I have not tried any of the recipes yet.

Another feature they had was a special tour. I believe it was called A Walk in Walt’s Shoes? W thought he read or heard about it at some point but wasn’t sure. He mentioned it to me in passing once but I completely forgot about it. We received a survey after AP Days ended where the tour was mentioned. I was definitely disappointed with the email communication we got because a special tour would have been cool.

I don’t expect free stuff, that’s not why we purchased the AP. Disneyland does Magic Hour for resort guests, where almost every day they can access one of the parks an hour early.

I’d much rather have more quiet time in the park than free popcorn and some buttons!

I love my AP no matter what the AP Days is like. We get tons of discounts around the park and other perks, so it’s absolutely worth it anyways. But I definitely wouldn’t mind some quieter hours in the park!

Hope everyone is having a wonderful day!

If you are a Disney person and plan on going in the next week, check out the Disney Egg-stravaganza.

We took L there yesterday to check it out. He didn’t really care much for it but we thought it was cool.

Basically in California Adventure, Disneyland and Downtown Disney you purchased a map. One map per location. Each map was $6.43 with tax.

The map came with stickers and told you where to look, like Wetzel’s Pretzel’s in Downtown Disney.

At each location to look for there is an egg that looks like one of the characters (your stickers correspond with this).

We rolled into the park around 12:30 and by the time I nursed Logan in the Baby Center and W bought our map it was 1 pm. It took us about an hour and a half to walk through Disneyland and find all of the eggs.

They were all in fairly easy locations, we had trouble with one of them by the Tomorrowland Terrace. They were definitely pretty cool looking.

We didn’t go in to California Adventure at all. We were only going for a short day and it was crowded with Spring Break starting. Hopefully the week is a little quieter. 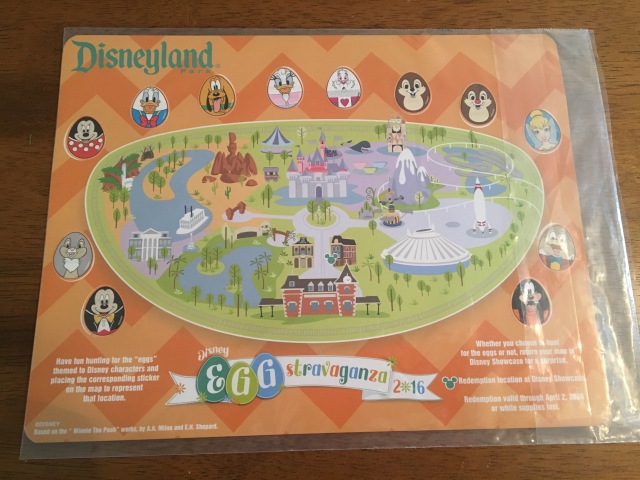 Then we took our completed map to get our prize, a plastic egg that looks like a character. The options we saw were Mickey, Minnie, Stitch, the Cheshire Cat, Woody and Jessie. 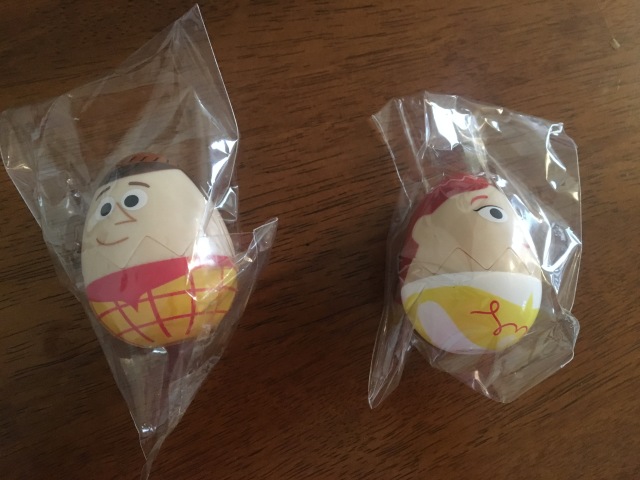 L (10 months old now!) didn’t care at all about the event. We stopped and showed him each egg as we found it (while he was awake) but he definitely didn’t get it.

While we thought it was cute, I think this would be really fun if you were in the park all day, or staying for a couple days and had kids a bit older. Then as you were hitting rides and areas you could spot them as you are going. We went strictly to stretch our legs, check out the event and bring home a caramel apple.

Hope everyone has a great week! I have some more Disney blogs coming up including a review of my thoughts on AP Days, the upcoming Disney California Food & Wine Festival and the Baby Centers!

Since we have our little guy and we take him to Disney so frequently, I think I’ll do a couple blog posts about taking tiny humans to Disneyland.

If you were taking your little to Disney, what would you like to know?

Anything in particular you want to read about?

Hope everyone has a great weekend! 🙂 I’m off to enjoy the rest of it with my sweet little family.

Check out these topics: